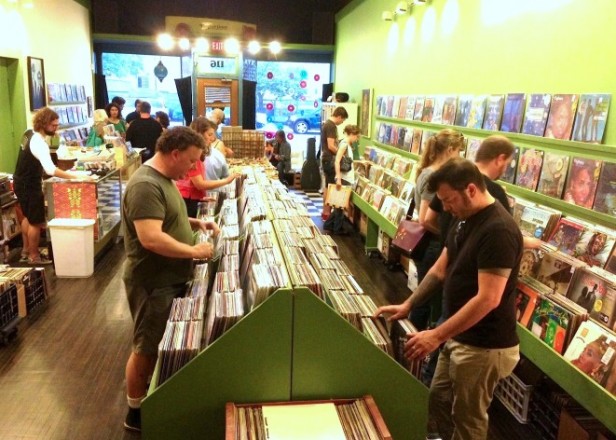 After a long time deliberating between days of the week or whether the idea was necessary at all, the International Federation of the Phonographic Industry (IFPI) announced earlier this year that there would, in fact, be a Global Release Day, and that it would be weekly on Fridays.

The decision went to Friday for several reasons. First of all, the majority of the world already uses it as the default release date, and while representatives from the United States' recording music industry may have tried to persuade the international community that they should adopt their ways, it didn't fly. Second, the working theory is that releasing albums just before weekends (and on paydays) will encourage music lovers to actually purchase an album or two, rather than stream (or steal) it.

So, will this new Global Release Day help or hurt artists around the world? Well, that's a tough question to answer. Whether it's a yes or a no depends heavily on the kind of artist, the label the act is on (if any), and what the goals are for the project being released. So, in a way, it both helps and hurts artists. Confused? Here's what I mean.

It will help artists

Having all musicians release their albums on the same day levels the playing field and makes things a bit more fair for everybody. Most people already stick to one day per week in their home countries (such as Tuesdays in the United States), but plenty of acts choose to go their own route, ignoring the dates mandated by chart companies like Billboard and dropping new albums as they please. If labels are encouraged to stick to one date and some pressure is applied, we may see more adherence.

This will also likely help stem global piracy, which is still a huge problem. Right now, an album will be released in one country on a Tuesday, and then several days later in many other major markets, with the rest of the world purchasing the product on entirely different dates. We live in a highly connected world, and it's naïve to think that many people will wait to legally buy a CD that's been available to them in other ways for several days (if not weeks or months).

This will really only affect those acts who are releasing their albums during the same week worldwide. Those who choose to leave several months in between when it's for sale in one nation versus another (due to promotional reasons) still have an uphill battle ahead of them. In a time when albums have a hard time selling as it is, artists and labels need all the help they can get.

It will hurt artists

In complete contradiction with everything I just said, there are a few ways in which a Global Release Day might actually hurt artists.

Putting artists on that same playing field forces them to compete with one another even more so than they already do. This applies to acts of all sizes, not just those vying for the top spot on the charts. For example, say there are a handful of indie rock bands, all of which have a good-sized following – the type of acts that are making a living in music, but perhaps not by much. If one releases an album on Monday, another on Wednesday, and the third on Friday, it's more likely that a fan of all three won't mind purchasing all three records, as it doesn't feel like he or she is spending a lot of money all at once. If those same three albums are made available on the same day, however, fewer net albums are likely to be sold.

Now, Global Release Day is only going to be suggested strongly. It doesn't force any artist to play along. Those at more established record labels may not have a say in the matter, but independent acts who might see the danger in pitting their release against heavier promoted works by more famous artists have the freedom to do what they will with their albums.

As with any argument, there are, of course, two sides to this debate, and whether this new Friday release date ends up being beneficial or detrimental to certain musicians is yet to be seen. Comfort can be found in the fact that, while marketing certainly helps sell an album, it really is all about the music in the end. If good music isn't there, no strategy can help you.

Regardless of your release date, learn how to effectively prep your album for public consumption: