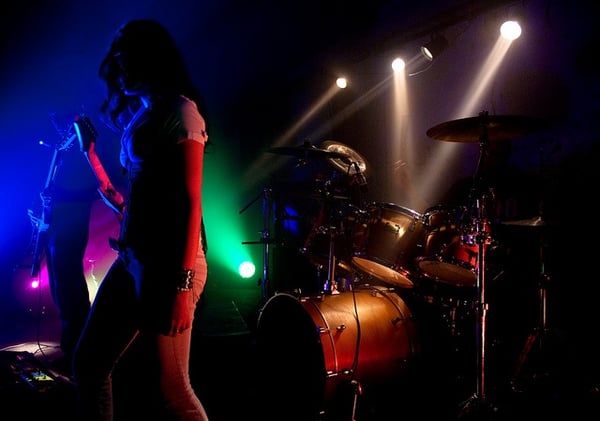 Upstart bands and artists in the early stages of cultivating a fanbase often encounter opposition when booking. From a business perspective, it makes sense: if a talent buyer or venue owner isn't sure you'll draw a crowd, then handing over a potentially big-bar-sales night to you is a risk. And when you do land a gig, he or she might insist on minimizing that risk by offering you a super low pay rate – or no pay at all. How do you convince that person you deserve more?

When looking to negotiate higher pay from venues, these three strategies can actually yield results, especially if you work hard to promote your shows. Really, these methods mean opportunities to genuinely earn more if you put in the extra effort. Talent buyers and venue owners can appreciate that, and most will pay you accordingly.

1. Show your worth with numbers

Bands often reference what they've been paid before when suggesting a guarantee or percentage. That's a somewhat futile method of negotiating, as no two venues are exactly alike financially. What works for one in terms of payments won't necessarily work for another.

Your best tools of persuasion here are found on social media. How sizeable is your online fanbase? For your last show, how many responses did you get to the Facebook event? It does matter, of course, how many actually showed up – but if you don't have crowd shots (use them if you do!), then the closest thing to proof of great attendance is those event responses. Send over your social media pages as well as past events to show the strength of your following.

This won't work for everyone, of course. Obviously, if you've never played before, you don't have any previous Facebook events to use as examples. Additionally, not everyone trusts the prowess those numbers supposedly signify: an impressive online following doesn't always translate to in-person devotion.

[Are Your Internet Fans Your Real Fans?]

This is sometimes referred to as “back end,” though that's technically the name of the extra profit you get. Here's how it works: you're guaranteed a certain percentage or dollar amount, but you also get an additional amount after a certain point. That marker can be a number of tickets sold, or the talent buyer's bottom line.

For our purposes here, we're talking about bands and artists who aren't getting much pay to begin with, so let's work with relatively low numbers.

This could be a situation where there are four bands on the bill, and each is guaranteed $50. If the door money reaches more than $250 – meaning more than 50 tickets sold – then 10 percent of the surplus goes to you. (And probably 10 percent to each of the other bands, too.) So at 100 tickets sold, you'd get your $50 guarantee, plus $25 more for reaching 100 ticket sales.

These numbers are somewhat arbitrary; they're intended not as standards of negotiating, but rather as examples you can adjust to fit the exact situation you're in. Talent buyers and venue owners might be more willing to accept a deal like this because there's little risk on their part. They don't think they'll make enough from the door to pay you more than X amount, and you agree to that amount – but you get a little more if you prove them wrong.

3. Prove your draw, then up your rate

Did it take a lot of convincing to get the gig? If the talent buyer or venue owner is dubious of your ability to pull a crowd, he or she might ask you to play for free. When you're just starting out, that's okay, but you should always be looking toward the future. You should only perform at no charge when it means it'll get you closer to paid, or at least better quality gigs. (Or if it's for charity.)

Agree to play for free (or cheap) once, but ask them to commit to another gig if you draw X number of attendees. Post-show, if you can, talk with whoever booked you. What did he or she think about the performance? The turnout? If the right person isn't present, follow up the next day via email or whatever form of contact that person preferred in the past.

Send him or her a clip of your set if you've got one, and mention the fan response as a way to help him or her see that your next show can be even more successful, and that you deserve some level of payment. Try to actually book a follow-up gig before the conversation goes stale. (Booking several months ahead is ideal, anyway.)

For more on transitioning from free shows to paid gigs, check out this interview with a seasoned musician who's successfully moved into making a living off her music.

Check out our tips for increasing turnout at your shows here. For help strengthing your show promotion techniques, try this post.