As musicians, we sometimes feel like we work and work and work, and wonder, when will the success come? Well, it's a long process, and it often works like dominoes. For Glasgow-based electro-pop duo Apache Darling, all it took to set off that chain reaction was posting two tracks on SoundCloud.

Sounds simple, right? Not so fast, though – as it turns out, the duo's strategy was to focus intently on honing their live show, and they've been smart about taking full advantage of the ripple effects of any little successes they've had. After getting selected for a performance at Toronto's NXNE Music Festival this past June through Sonicbids – their first-ever North American show – they knew it was only the beginning.

"Sonicbids and NXNE really kicked off our summer festival run," they told us. They leveraged that win by going on to own the summer festival circuit when they returned back home to Scotland, taking the stage at T in the Park (where bands like Biffy Clyro and Franz Ferdinand played early in their careers), King Tut’s Summer Nights Festival, Party at the Palace, and Pride Glasgow. In the interview below, Apache Darling gives us all the details on how they cultivated their following and manage to keep building upon their success.

END_OF_DOCUMENT_TOKEN_TO_BE_REPLACED

Insider Info: 5 Things You Must Know About Playing NXNE for the First Time

Still thinking about what it might be like to play the 21st annual NXNE Music Festival this coming June? With submissions closing this Saturday, January 31, we've compiled the ultimate guide to navigating NXNE with insider tips on what new performers and attendees need to know to make the most of their time in Toronto!

END_OF_DOCUMENT_TOKEN_TO_BE_REPLACED

Where Are They Now? 4 Sonicbids Artists Who've Rocked NXNE 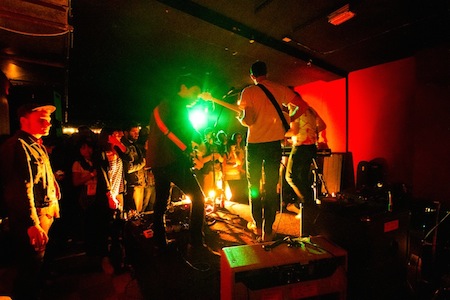 If you're starting to think about New Year's resolutions, make sure earning a spot at NXNE 2015 is one of them. NXNE boasts some of the biggest names and freshest thinking in music, culture, and tech, attracting international recognition. Over 250 Sonicbids artists will have the opportunity to play the 21st annual music festival in Toronto, Canada, from June 17 to 21, 2015. And artist submissions are open now.

The festival has been a jumping off point for many independent artists over the years. Check out these four Sonicbids artists and what they've accomplished since landing performances at NXNE.

END_OF_DOCUMENT_TOKEN_TO_BE_REPLACED

You wouldn't expect the sounds of Laurel Canyon in the 1970s to come from someone born and raised in Sydney, Australia, but Americana singer-songwriter Caitlin Harnett defies the norm. In the past month, she released her debut album The River Runs North to a flurry of praise for her soulful vibes and rustic folk stylings. A NXNE veteran, Harnett shares her tips for playing the festival and how Sonicbids can accelerate the process of becoming part of it all.

END_OF_DOCUMENT_TOKEN_TO_BE_REPLACED

It's time to look north – NXNE, that is. In case you haven't heard, Sonicbids is the exclusive submission platform for the 21st annual NXNE Festival, Toronto's yearly summer music and arts festival and interactive conference. Bringing together big names in music and tech, emerging artists, and leaders from around the world, 2015's bash is scheduled for June 17-21. You might be wondering, why should I be thinking about summer and Canada in October? Because NXNE 2015 artist submissions are open now, and you can apply for only $30 before the December 31 early deadline.