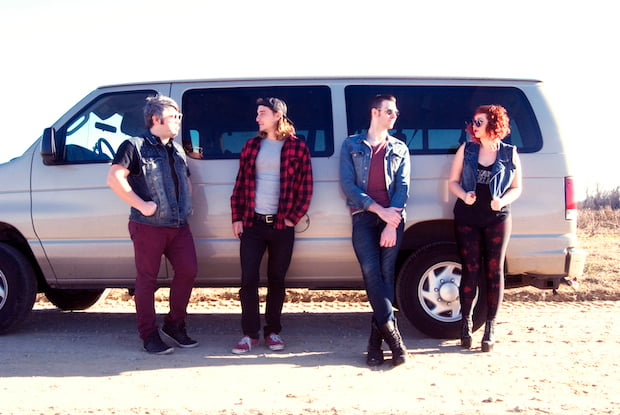 To the casual music fan, South Carolina and pop music generally don't have much in common. Death of Paris, however, is ready to change that perception, showing that pop is alive and well in the South – and they're doing it entirely on their own terms.

There are countless independent bands out there, but only a very small fraction have figured out what it takes to make it work. Although Death of Paris is just starting to gain traction with major gigs like SXSW and Vans Warped Tour, they've already proven that they've got the heart and the hustle needed to have a successful career in music. In this interview with lead singer Jayna Doyle, get a firsthand look at how this self-managed and fully DIY band navigates the ups, downs, and everything in between.

As a DIY band that self-manages, promotes, and books your own tours, what have you found to be the most valuable resources for building your career and why?

I want to say networking, meeting people in the music industry, making friends with the bands we play with and the venues we play, and shamelessly promoting our name. But sites like Sonicbids, Indie on the Move, and even social media in general have done wonders for our band and have been the most priceless resources. Sonicbids has enabled us to get on the radar for opportunities otherwise impossible for unsigned bands. I can't even imagine trying to book a tour without a resource like Indie on the Move.

But the most invaluable resource for us as a DIY band is probably the ability to interact with our fans directly through our social media. We can find out where people want us to play, gauge our demographic, poll our fans on merch, get an immediate response on new music, and maintain a true connection with our fans. Having that direct connection and communication with our fans is very important to us. As a DIY band, all we've got are our fans, and we're ultimately working with them to become the best band we can be.

When it comes to managing it all yourself, what do you find the most difficult, and how do you deal with it?

The most difficult thing is juggling everything. Between booking the tours, managing the finances, scheduling the photo shoots, endless emails for press consideration, brainstorming fundraising ideas, shooting and editing our own music videos, designing our own merch, and practicing, we lose a lot of time that we could be spending on actually making music, which is incredibly frustrating because that's what it's all about. We deal with that by writing what we can in the late hours of the night after our day jobs, scribbling lyrics down during lunch breaks, or skipping out on family get-togethers so we can demo new ideas.

Another super stressful aspect of managing yourself is the fact that even after all your hard work, you're still just barely out of reach from the doors you're trying to open because of the fact that you're managing yourself and don't have that representation to get you just that bit farther in your career, but we're grateful for tools like Sonicbids to be that middleman for us self-managed bands.

What motivates you to persevere, even when times are tough?

The fact that we don't know what great thing might be just around the corner from us, plus the gravity of how hard we've worked to get to where we are now. At all of the most pivotal moments in our career, all the times our toes were dangling on the thresholds of those big doors we've worked to open, we had major setbacks and major lineup changes. The easy thing to do during those times would have been to break up, but breaking up is not an option for us because we aren't done doing what we set out to do.

We persevered by not dwelling on the negativity of what was happening and instead keeping our eyes on the future by regrouping and gaining strength through our defiance of letting those setbacks get the best of us. Our fans have been our backbone through those times as well, showering us with love we so desperately needed when they had no idea. We are so humbled that so many people didn't give up on us when we've lost our footing in the past and that they believed in us and knew we'd overcome such difficult times even when we weren't completely sure. Their support is something we always reflect on when we're feeling down and need a boost of motivation.

Your recently released EP, GOSSIP, is accompanied by self-made music videos for every song. What's your strategy behind that? Do you think the addition of music videos will help you reach a wider audience than just putting out an EP alone?

We love shooting music videos! Before starting the band, I went to school for film and the dream then was to do music videos for a living. We didn't really have a strategic reason in wanting to put out a video for every song on the EP, we just thought, these are all songs we've been playing out for a while, and we want everyone [to] visually interpret them in the way that they're intentionally written. We thought it would add more depth to the EP if you can see how the individual songs' stories play out as part of separate chapters in a larger picture. I think adding music videos as part of our promo for the EP enables an audience to see who's behind the songs and gain a better insight into our personalities and what we're about as people in a band.

Will it help us reach a wider audience? Possibly. With the whole "don't judge a book by its cover" saying, people may come across our video not previously having known about us, have their interest piqued, and then accidentally fall in love with the song while watching. Regardless, if it's the EP in someone's hand or our music video on YouTube, the music is there either way. As long as it's out there getting heard, that's all we care about.

What advice do you have for other indie bands looking to put out music videos on a tight budget?

Music videos can definitely help you reach a wider audience and maintain your buzz while you're not on the road. With iPhones and flip cams, it's really easier than ever to shoot your own high-quality music video these days. Come up with a story, a storyboard, scout locations, promise your friends some guest list spots at the next show to get them to play characters in the video, get your fans to play themselves at a live show taping, plan it out, and shoot!

A cool idea would be to set a camera up with a few different angles at multiple shows, maybe get a friend to go around and film the crowd, and get some close-ups. Edit clips from those few shows, drop in the song (don't use the live audio), and boom, DIY music video. Final Cut Pro is really easy to use, and there are tons of online tutorials. And if you don't feel comfortable editing, check out the film/media arts department at a nearby college and post some flyers to help find a student to edit for you. All these things are virtually free!

Even with such a crazy amount of competition out there, you were still selected through Sonicbids to play last year's SXSW, Vans Warped Tour, Florida Music Festival, and Charleston's Spring Jam Music Festival. What did you do to cut through the noise?

We've been steadily applying for all these opportunities the last two years and are finally getting selected for some of the toughest spots we've continuously sought after. In the meantime of not getting selected in previous years, we've toured, recorded, developed ourselves as a band, and kept doing our thing so that when we finally were selected, we'd be even more ready than before. No band can really know for sure what any of the promoters are looking for in bands that apply through Sonicbids, and you really have to just apply wholeheartedly to everything with fingers crossed, hoping you're what they're looking for this year.

What's the biggest lesson you've learned about the music industry so far?

It's so much smaller than you think. Winning over one person may lead to 10 more opportunities, and the same goes for pissing off one person, [which] might mean you can't play these 10 places. We've always made it a point to be nice to every single person that we work with; it's just common human decency, and we really appreciate all the hard work that everyone does in the music industry to make sure that music, albums, venues, press, booking, labels, radio, blogs, social media, etc. happen each and every day.

The biggest lesson for me, though, has been to not take things personally. If another band talks down to us, if a venue turns us down, if a label doesn't respond, you can't take it personally and you can't be hurt or defensive. There are other bands to play with, other venues to play, and other labels better suited for you, so it's important to remain positive and not let being turned down get you down, because then you'll just waste time feeling like a loser instead of moving on to bigger and better opportunities. It's important to be on the radar for as many people in the industry as you can, because if you keep working hard enough you will attract the right partnerships.

March 13 to April 1 is our spring TOURNADO tour taking us back out to Austin again for SXSW. We'll also be playing the LAUNCH Music Conference and Festival as well as the Florida Music Festival in April. An East Coast tour is set for early summer, and we'll be venturing out to the West Coast for the first time this summer/early fall. We will be releasing more music videos to coincide with our GOSSIP EP, continuing to write for our new EP, and will be going into to the studio later this year. We're going to keep bettering ourselves as a DIY band, but this year we'll be reaching out to management, booking, and PR in hopes that we can expand our team and allow ourselves more time to focus on making music!

Check out Death of Paris' brand new music video below!