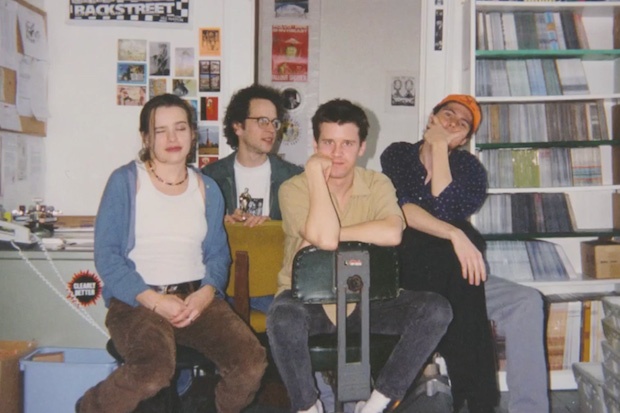 Over the course of the last 25 years, Superchunk's Laura Balance and Mac McCaughan (seated in front) transformed their label, Merge Records, from a bedroom operation to one of the most influential indie tastemakers in the world. (Image courtesy of Merge Records)

Depending on who you talk to, the internet has either helped or hindered the music business. Some people (myself included) think it's done both. Sure, sales are down and the economic paradigm continues to shift, but access to music has never been greater, vinyl sales continue to grow, and with such a low barrier to entry, it seems as if there are more new bands than ever.

That's also a downside. There are lots of bands vying for music consumers' attention. Old bands. New bands. Bands with a hyped debut. Bands that need likes or follows. Bands that need money (and aren't afraid to ask). Then there are reissues by classic bands, obscure bands, recently unearthed bands, bands with a documentary, bands on a reunion tour, even SoundCloud bands. What's the deal with SoundCloud bands?

You see what I'm getting at. There's a lot of noise out there – which means it's easy for your noise to get lost.

Obviously, the technology has made creating and disseminating music easier than ever, which means artists are able to control their business more than ever before. There have been plenty of recent success stories – Clap Your Hands Say Yeah and The Civil Wars come immediately to mind – both of which rode internet and industry buzz to create new-school deals that garnered them wide distribution without signing to a label, which means they not only kept total control of how their record was recorded and marketed, but they made a lot more money. Furthermore, the success story surrounding how each band conducted its business dovetailed nicely into their respective buzz.

[8 Questions to Ask Yourself Before Signing a Record Deal]

But here’s the rub: being DIY is totally doable, but it takes an unimaginable amount of work and dedication to do it right. And it takes money. And if you don't have someone helping you do the legwork – be it someone in the band, a manager, or yourself – or helping offset the financial burdens, then there's a greater chance that your music will get lost in the shuffle. And even if you're doing all that work, you may get to a point where you want to pass along some of that labor in order to focus on what you do best – your music.

This is where labels can still be of service. Big or small, a label should be able to use its power – and, in some cases, ubiquity – to bring extra heft to the album you've put your heart, soul, and resources into. Of course, by doing so, you'll also be ceding some (or, if you're not careful, all) control.

So, as I was coming up for the reasons one might want to work with a label, I got in touch with an old friend, John P. Strohm. John is a Nashville-based attorney working with independent-minded artists across the spectrum of the music business circa now, including aforementioned DIY-ers the Civil Wars, as well as established and up-and-coming firebrands like Bon Iver, Waxahatchee, Sturgil Simpson, and Alabama Shakes (who just scored their first number-one album with Sound and Color). John is also a fantastic artist in his own right, both as a solo artist and as a member of Blake Babies, the Lemonheads, Antenna, among others – and, thus, feels particularly protective of his clients' best interests.

He read my mind when it came to what still makes a label worth your while in a nutshell – so it was great to have his wisdom back me up. We broke it down to three simple things. To wit:

Pressing vinyl, hiring a publicist, marketing – it all costs (a lot of) money. And, with any luck, money is something your label should have.

"Labels pay for shit so you don't have to," says John. "That's why record deals are company-friendly. They're taking a risk that the artist is unable to. This was much more relevant before the internet and digital distribution. You needed a whole lot of money to do a project in the '80s or '90s. You had to pay for a professional studio, there was only physical product, just everything – there was a large price tag on it. These days, there can still be a large price tag on it.”

But it's that large price tag that you have to be mindful of. Signing to a label is not free money. A label is making an investment in your band, likely with terms that are more favorable to them. So if you don't sell records – and have a good plan to sell records – then, depending on the deal, you could find yourself with some debt.

Record deals come in a variety of shapes and sizes – from 360 deals (where a label gets a piece of everything you do, including touring revenue and merch sales) to the "touch-and-go" deal (a classic indie deal where, after expenses, the band and label split revenues evenly). Even if you're really excited about the label that wants to release your record, make sure that you're comfortable with the terms. And, of course, don't sign anything without talking to a lawyer first.

2. Labels have resources and connections

"You go to a label so you don't have to put something together ad hoc," says John. "They're gonna assign a project manager to put it all together for you."

Even if your label doesn't have a lot of money, they may be rich in resources, including a publicist, a marketing department, placement/licensing people, making your records and CDs, managing your online presence, and providing distribution that will assure your music is attainable by mom-and-pop shops as well as Amazon and other large retailers. Even if the label doesn't offer these services in-house, they likely have connections to companies who can perform these services well – and at a group rate.

A good example of where a label can really flex some muscle is radio. Servicing songs to radio is always an expensive proposition, and for some genres – particularly country music – it's almost impossible to break through without the support of a label. It's not unusual, according to John, for those costs to be somewhere in the six-figure range. That said, even if you have the money, the label itself serves as a trusted gatekeeper. Without that approval, most programmers won't give your song the time of day.

Again, no matter the size of your record deal, it's worthwhile to get a sense of how the label will be putting your resources to good use. While some labels may excel across the board, others will be great at some things and terrible at others – and, in the case of the latter, be sure that you'll have options for taking care of what they can't.

3. Labels have a reputation and curation

"Waxahatchee signs to Merge. That's great. How much is it really gonna mean in practical terms? It's hard to say, but even...something [that's not] nearly as established as Waxahatchee, signing to a label like Merge…has its own fanbase," explains John.

For some artists, signing to a label that you've long admired is its own reward. Even if the financial benefits are scant – as is so often the case in the indie world – being associated with a hip label carries a certain cache. Even if the label's resources are minimal, joining the roster of a cool label often has a built-in buzz, which means that journalists, bloggers, and record buyers will be automatically drawn to your release. For John, these associations aren't always as valuable as they used to be, given the sheer amount of noise there is to rise above, but for some, that association is what a label is all about.

Andy Stewart runs a small label called Step Pepper Records that trades, by and large, in electronic music, but features a handful of rock acts like Nowhere Squares, In Snow, and Onehundreds. For Andy, the cool-by-association factor a label brings to its artists is key. "You could argue that curation is the most basic reason labels exist," he explains. "Even beyond the artist management and economics of the biz. The reason you know any label by name is most likely because you associate it with a well-curated sound that you consistently enjoy. Listener loyalty is based on trust over time. Labels that become lightning rods in their genres get that way through quality control."

As someone who has worked for both indie labels and distributors, I can assuredly tell you this: At the end of the day – whether you're with an established label or a fledgling one – even if you do everything "right," you'll never know what will ultimately happen with a record. People buy it, or they don’t. They write about it, or they don't. They come to the show, or they don't. It can be dispiriting to see a project you believe in fall swiftly into obscurity, but that makes the victories all the more sweet, not to mention educational. You may even glean enough useful information to take the reigns of your next project yourself – or start a cool label of your own.

You may also want to read: