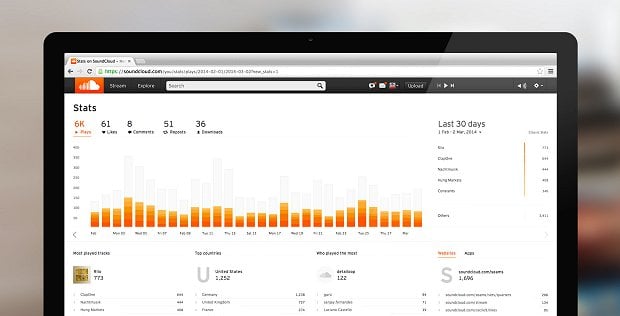 SoundCloud has increasingly become one of the most important tools in an artist's toolbox. Most blogs prefer a SoundCloud link over any other streamed audio file for several reasons. One is simply the ease of use. There's no hosting on their part; the file is typically hosted through the artist or record label's account, so there's little risk of copyright infringement. In addition, a strategic alliance between SoundCloud and Hype Machine means a bit more exposure for their blog, as those links receive a higher ranking for potential charting with the music aggregator. In order to take full advantage of these opportunities, here are eight ways to set a firm foundation to maximize your exposure on SoundCloud.

Create a great description with a call to action that makes potential fans want to click on your songs to hear more. This should not be, "________ band has the most amazing indie rock songs in the world." "Dig into the haunting ambience and sweeping melodies" would be on the right track. And, while you're at it, include contact information so media and the industry can get ahold of you if they have an opportunity for you.

Include a compelling publicity photo that clearly defines your sound and makes fans want to hear more.

Make sure you've linked back to all your social networks and website in your profile so people can keep up-to-date with what you're doing when they fall in love with your music. While you're at it, include those links in your song and playlist descriptions.

Always include your band name in the title with the name of your song, so it reads "Artist Name – Song Title." The reason being is that when someone adds you to a playlist (which we hope they do), your band name doesn’t appear in the playlist widget if you solely have the song title alone. Also, if there's a guest artist on your track, you should include them in parentheses and tag them to increase listens.

If you really want to be found, tag your tracks with as many search options as possible, including:

If your tag is more than one word, place quotes around the name so it appears in one tag versus being separated and losing its validity. For example, The White Stripes would be "The White Stripes." If you don’t use quotes, then each word would be separated as "The" "White" "Stripes."

If you're releasing a single officially, have cover art locked and loaded to make you and your song more memorable. You should do the same with your album art.

The cold, hard truth is that you need to give something away to expect a better return. Although you don’t have to do this with every single, you should pick one with the best hooks to release as a single and offer it as a download. Back in the day, a hip indie blog wouldn’t even consider posting an MP3 unless it was downloadable. Thankfully, they've eased up on that, but having a downloadable track versus streamed audio can still play a big factor in your success rate.

Always include a short description of your sound, contact information, links to your website and social networks, and buy links to iTunes or Amazon if you have them.