What No One Tells You About Booking Gigs in LA 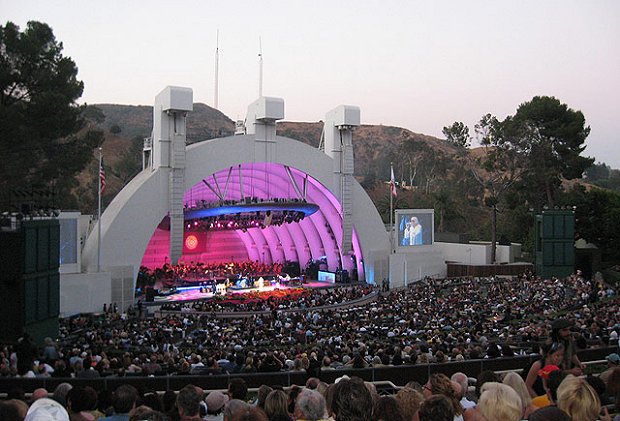 One of LA's most famous venues, the Hollywood Bowl. (Image via moderncurves.com)

In the 1800s, scores of folks migrated west, seeking fortune in the form of gold nuggets. Today, countless musicians do the same – although the gold of their dreams comes in more of a round, record-type shape. For many, Los Angeles is the pinnacle of the music biz, but the competition is fierce, and there, more than anywhere else, only the strong survive. So how do you navigate these shark-infested waters? Here are some pro tips from Linda Fair, an LA-based A&R exec and publicist with 10 years of experience booking new talent and placing tunes in films via X-Rite Records and Java with Javelyn Indie Music Nites.

What are the most common payment structures that bands will come across at LA gigs?

Unfortunately, many LA promoters are forced into the "pay to play" structure, which means that a band guarantees that they'll bring people to a gig by selling tickets beforehand. Regardless of whether or not people show, the band pays for the tickets upfront or gives a bar guarantee (through tickets or simply paying for it themselves). If you want to play the bigger venues, there's usually no way around this.

Smaller shows, however, like our Java With Javelyn Indie Music Nites, are designed to train artists for those bigger gigs. At Indie Music Nites, we give anyone a time slot for three songs, and if they demonstrate that they can bring people, we give them a bigger spot. If an artist wants to play in Los Angeles and doesn't bring anyone, the room tends to empty out entirely, so it's always good to bring at least one or two people. We try to encourage artists to work on their email list and merch (CDs, T-shirts, etc.) when they play out, and link up with other artists for bigger slots.

Compared to other cities, what's the most important thing that bands need to know about working with promoters and venues in LA?

Bands are expected to support the venue by getting there early, meeting the promoter, and bringing an audience that will patronize the bar. Don't overplay LA; it looks bad to your fans and promoters alike. Try to play once a month rather than once a week. Also, make sure you tailor your show to fit the venue. Setting your amps to 11 in a small space will only get you kicked out, and giving attitude to a promoter might get you black-balled. The promoter community in LA is extremely small, so the last thing you want to do is get a reputation for being loud and obnoxious.

Bigger venues tend to have green rooms, but backlines are virtually non-existent because musicians tend to trash the equipment. As a result, venues often won't provide any in-house equipment – not even mics or cords.

What do LA venues typically expect of the bands they book?

Above all, professionalism, a bit of humility, and communication. Confirm your time, promote your show, and, for extra brownie points, let the promoter know about your promotional efforts. On gig night, be there early, check in, and be ready to go onstage at your scheduled time. Also, don't gab with your fans and friends while another artist is playing. It's rude, and we, the promoters, don't want to be the ones to have to shush you.

What's the best way for a band to break into the LA market?

No matter who you are, what you've done, or where you come from, stay humble when you perform in LA. Promoters will notice if you have a good work ethic and professional attitude. Most of all, courtesy and kindness to the venue, promoter, and other artists goes a long way.

What's the biggest difference between booking shows in LA versus other cities like NYC or Nashville?

Probably the "pay to play" structure mentioned above. We toyed with the idea of "pay to play" for our Indie Music Nites, as we had many artists at the beginning not show up, even after booking with us. Even now, there's almost always at least one artist every show who doesn't communicate and doesn't show up – it's crazy. In LA, some artists just don't take their commitments or time slots at a venue seriously.