How to Be the Opening Act That Everyone Loves 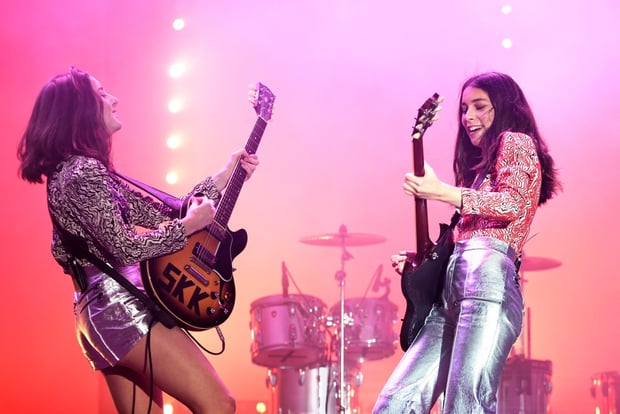 Haim was once an opening act for Rihanna. (Photo by Christian Bertrand via Shutterstock)

There are lots of really great things about opening for another band. If you play well and conduct yourself professionally, you have a high chance of being asked to come play again, and you’ll probably meet some new friends along the way. Unfortunately, many artists choose not to be a respectful opener. This is often the exact reason why they continue to be the opener rather than the headliner. Word travels fast in the music business, and it’s hard to work past a bad reputation. In order to be the best opener you can possibly be, here are five tips on how to become everybody's favorite opening act.

This is the boundary that gets overstepped more frequently than any other. Whether it’s due to technical difficulties, taking too long to set up, or just playing too many songs, going over your allotted set time can skew the timetable of the entire event.

If you’ve been given a 30-minute set, plan 20 minutes of music. Having that extra cushion of time is essential to making sure that you have time to deal with any technical issues that may arise. You can always add another short song should you end up with extra time.

If you're an opening act, finishing a little early is not necessarily a bad thing. If the night is already behind schedule, this can actually help to move things back into place. Try to remember that those who are at the gig aren’t necessarily there to see you. Be gracious and use your time wisely.

Make sure you’re the kind of opener that a venue would love to have back. This includes all of the staff, the promoter, and the sound engineer. The music world is very small, and if one venue has a particularly negative experience with you or your band, they will undoubtedly warn other venues.

One of the biggest things you can do to develop and maintain a good relationship with a venue and its staff (other than being really nice) is to clean up after yourself. This seems like a terribly simple concept, but every time I leave a venue, I see the scattered remains of other band’s trash. Water bottles, food wrappers, napkins and towels, setlists, tape – all of these end up getting left behind in massive piles every night at local clubs in every city. Making sure you pick up any trash, and even grabbing some of another band’s trash, will save the venue staff lots of time at the end of the night, which is something they will very much appreciate.

Communication is also a huge part of building a relationship with venues and staff. Make sure that you have confirmation for every aspect of the gig ahead of time and get back as soon as possible if they're the ones asking for confirmation. Be honest when they ask you how many people you can draw. If you lie and say you can bring many more people than is realistic, they will expect and budget for the numbers you gave them. When not as many people show up, everybody loses out.

Make sure you’re the kind of opener that a venue would love to have back.

Take some time prior to the gig to familiarize yourself with the other bands’ music, especially the headliners. If you’re able to have a specific conversation with one of the bands about something in their music that you like, it will really show a lot of enthusiasm on your part. Be excited to play with the bands you are, and to be opening for whatever band happens to be headlining.

Oftentimes, the more interest you show in the music of others, the more interest they will put into yours. Relationships are a two-way street, and by building up your relationship with another band, you'll find them taking a greater and greater interest in anything that you put out. Taking genuine interest in others’ art will drastically increase your fan pool, as musicians tend to have a lot of friends. If you can get your musician friends to talk about you to their friends, you'll begin seeing exponential growth in your draw numbers.

4. Focus on the music

As I mentioned above, it’s important to remember that most of the people in the audience are going to be there for the headliner. In order to gain their attention and interest, I would mainly focus on your music and playing as many songs as you can in your time slot. Try to trim down the stage banter if possible. This is your chance to showcase your sound to a bunch of fresh potential fans, so it’s important to give them a variety of your best work.

Make sure that anyone wishing to look you up after the concert can easily find and remember your name so that you can still clearly promote yourself without talking the audience to death. Try to have your name on a large poster and display it onstage with you during your set. If you don’t have any merch to sell, set up your sign on the merch table regardless so that people can see your name wherever they go. I can’t tell you how many times I’ve seen an awesome opening band that I’ve loved, only to have missed their name the first and only time they said it.

Being an opening act is great, as you'll likely meet a lot of new faces among the venue staff and other bands. It’s important to introduce yourself and make a lasting impression with these people, as building these connections will help sustain your career. Don't use this opportunity to be pushy about yourself or your music.

If you're the opening act on a bill, you're likely there by invitation. Be as gracious and appreciative as possible when introducing yourself. Make sure you're getting to know these people as human beings, not just tools to be used to help you advance your career. That's the only way to make connections that last.

Try to politely connect with fans and attendees after your set as well. You want to make a memorable impression to those who are seeing you for the first time, as you'll want them to come to every one of your shows from then on. Being present in the crowd is also respectful to the headliner, and if you're able to show enthusiasm about everybody’s set, you'll be the one they call to play again.