8 Things You're Forgetting to Do on Show Day 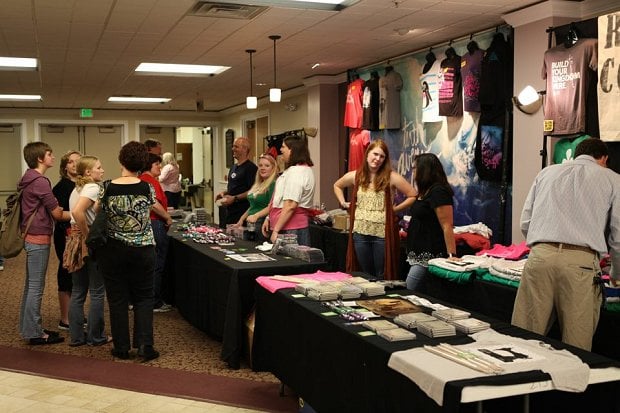 I meet (and play with) too many musicians who don't want to get to the venue early enough. Some like to arrive shortly before they need to play, others slightly before doors, and still others feel they're being responsible by allowing the bare minimum amount of time they believe they'll need to load in, set up, and soundcheck before start time or doors. Until you have a tour manager, you'll need to designate pre- and post-show duties within the band. These jobs cannot be overlooked.

Most musicians don't understand everything that needs to get done before the doors open. The obvious necessities of loading your gear in and setting it up is understood. Many bands don't fret over soundchecks with an "it'll be fine" attitude.

Fret over soundcheck! It's incredibly important. Sure, there will be shows with venues that are so put together that everything runs smoothly and soundcheck takes 10 minutes or the engineer mixes you on the fly with no major issues, but you can't plan for that. Always plan for something to go wrong: a faulty DI box, a shoddy mic cable, your tuner mysteriously stops operating... the list is endless. Even if the equipment works flawlessly, every room is different and responds differently to your sound. You have to allow time to let the engineer feel out your sound in the room. You don't want the first three songs of your set to sound like butt, cluttered with feedback, because the engineer is attempting to mix you on the fly (and giving the audience an unsettling feeling about you).

You want time to feel it out onstage and get comfortable with the space. I've played too many shows where a soundcheck wasn't possible or was cut too short, and I hated performing because it felt awful onstage, and I couldn't settle into my performance and therefore put on a bad show. This can be overcome by setting aside enough time for the soundcheck.

And yes, of course, there are venues that just do line checks. Especially in LA and NYC where they book bands every night on the hour. Nothing you can do about that! Bummer.

Once the soundcheck is finished. your night has just begun. Setting up your merch is the next step and almost equally important as getting a good soundcheck. If you aren't touring with a tour or merch manager, you should designate one band member who will be in charge of the merch for the entire tour. She should be responsible and decent at math. She'll need to count in and out the money every night, and she should also be friendly enough to train your merch seller for the night. And make sure your display is big, organized, and in a prominent section of the venue near the door (or the place the venue has designated). You should bring lights for the merch display because many times venues will not have well-lit merch tables. And make sure you accept credit! Square, PayPal and Amazon all have free swipers and only take about 2.7 percent. It's the difference between making an average of $5 a head and $10 a head in merch.

3. Get a merch seller

You see touring bands tweet about this all the time: "Need someone to sell our merch tonight in Lincoln. Get into the show for free. Email merch@ourband.com." Until you're packing theaters, you won't be able to afford to bring a merch manager on the road with you, but you must have a seller at the table before, during, and after the show. Not having someone by the table while you're playing will cost you. Bands bitch all the time about low merch sales, but most of the time they aren't selling because they aren't doing it right. If someone wants your T-shirt or CD but has to leave early and glances at the merch table on his way out, and there's no one there, he'll leave without buying anything. No one is going out of his or her way to try to pay you, and he or she definitely won't go online and buy it once outside the venue.

Many venues will allow you to load in near the stage door, but won't have a spot for you to park, and you'll need you to move your car from the load-in door. This can be huge hassle if there isn't a free, dedicated parking spot. I've had to spend up to 30 minutes finding parking and walking back to venue. Be mindful of this and plan accordingly. And to make sure you avoid this hassle, always go over parking when you advance the show with the venue a week or two beforehand.

This is typically very overlooked by most artists. It's your night at the club and you want your fans to have a good show, so look out for them. Many venues (and especially colleges) will be able to set up their room multiple ways. Sometimes the way a room is set up needs to be changed for your show. For instance, if you want people to dance, but the room is full of chairs, all it takes is asking your point person at the club (or sound guy) if you can get rid of the chairs or shift them around to clear a dance floor.
Some venues are set as is and you will not be able to change anything ever, so be aware of that too.
At nearly every college I've played (over 100), I've had to rearrange the room to make sure people are comfortable. No one knows your show experience better than you. Take initiative and work with your point people to rearrange the room to fit what's best for your show and your sound.

You then need to make sure the door guy has your guest list. Some venues require this list to be emailed well before the doors open. Make sure to go over this information when you advance the show.

You should also find out who you are settling up with at the end of the night. Hopefully that person is the same person you advanced the show with. Before the show, go over the other agreed-upon details that are in your email confirmation and that you advanced: drink deal, food deal, lodging, door cut or guarantee, set length, curfew, etc. And always count the cash in front of the manager. It's not insulting, it's expected.
I once played a show where lodging was included in my deal that I negotiated with the talent buyer, but the venue manager on that night didn't know about it and no one booked a hotel. (I also forgot to advance this show!) At the end of the night, all local hotels were booked and I ended up crashing on the beer-stained couch of a fraternity with a party happening around me 'til 5:00 a.m. That's when earplugs come in handy!

It may seem like musicians never forget to eat, and most of the time you'd be right, but I can't tell you how many shows I didn't actually schedule time to eat, got caught up in all the other show prep, and felt light-headed by the end of my set because of my growling stomach. Schedule dinner!

Ari Herstand is a Los Angeles-based singer/songwriter and the creator of the music biz advice blog Ari's Take. Follow him on Twitter at @aristake.