6 Things I Wish I Knew Before Recording My First Album 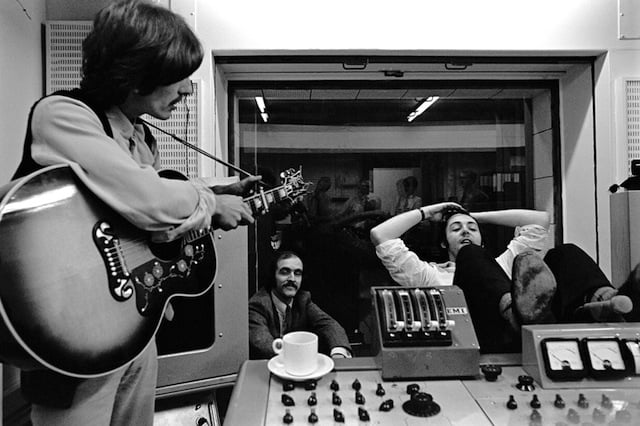 The Beatles in the studio. (Image via thebeatles.com)

The process of putting out new music has changed drastically over the last few decades, especially for independent artists. On one hand, it's easier than it's ever been to record and release an album. On the other hand, there's now much more competition, and you have to really work your butt off if you want your album to reach farther than your immediate friends and family.

Whether you're getting ready to release your first album, EP, or single, there are a couple of key things to keep in mind. Though it's probably a very exciting time for you and your group, don't get so caught up in it that you forget to plan or take the steps necessary to promote your new release!

I've made and witnessed some mistakes when recording with my bands or participating in the recording process on other people's records. Here are some of the big lessons I've learned.

1. Recording is only one step

With today's technology, anybody who wants to release a record could do so fairly quickly and on a shoestring budget. Borrow your buddy's home studio gear, record all of your songs, put them up on SoundCloud or Bandcamp, and bam – you've just released your first album.

Unfortunately, this is the point where many new artists think they're finished. They might make a few Facebook posts regarding the release, but they get stuck right at the starting line and don't know why their record isn't blowing up the internet.

If you're just doing the recording for fun or to share with friends and family, this is a perfectly fine place to stop. But if you're actually looking to sell copies and use the material to promote your act, there's a lot more that goes into the process. There are tons of resources right here on the Sonicbids blog that can walk you through all of the elements that go into really promoting a new album, but the common thread is that the entire process could easily take six to 12 months! It requires a big commitment of time and energy to make your release stand out from the massive wave of new music that's being released every day, but every hour you put in will reflect in your sales figures.

There's a lot that goes into making an album, and much of the process actually takes place before you even hit the record button.

A key factor that separates successful releases from total flops is solid, specific planning. How are you going to get people excited about the release? Where are you recording, and who is doing the audio work? How much is it going to cost, and where is that money going to come from? These are things that have to be established as early in the process as possible, otherwise you could end up floundering. If you're planning on booking a tour to promote the release, or even a single CD release show, you should start working with venues and other bands months in advance to make sure that you get the ideal date and lineup.

How are you going to promote your album once it's first released? Try to plan your whole strategy prior to heading into the studio so that you have a clear path to follow when the time comes. Otherwise, you may end up making a few social media posts but get overwhelmed with other band duties and not find new ways to promote your current release.

Studios are expensive, and even if you aren't in some big-name recording location, it can still be a very exhausting and stressful experience. But if you're 100 percent prepared before heading in, you'll undoubtedly save a lot of time, stress, and money.

If you have even the slightest uncertainty or weakness about any part of any of your songs, be honest and address these issues in rehearsals before the recording. The microphone is your harshest and most honest critic. Oftentimes, mistakes that you make that sound minuscule at a concert will stand out like a sore thumb in the studio and could even make a mess of the whole recording.

There are some issues that aren't even noticeable until you hear them on a recording. This is why making a demo is extremely beneficial. As you get ready to head into the studio, ask a friend or a local independent engineer to make a quick, cheap recording of your band, playing through all the material that will be on your record. This way, you'll be able to hear exactly what will be on the recording and identify any mistakes before you start spending the big bucks on a nice room (if you choose to go that route).

Recording is a highly focused and very tiring process, and it can be very easy to burn out in the middle of it. This is something that a lot of new artists learn the hard way.

Let's say you have two full days of studio time booked. If you're trying to plan things out, it would seem logical to do all of the instrumental tracks on one day, then do all of the vocals and mixing on the next day. However, a plan like this is a recipe for disaster.

Even the most prepared group can take quite a few tries to get that magic take. Have you ever tried playing one of your songs six times in a row without stopping, while under the pressure of a budget and a deadline to play your best? It's stressful, and the stress and extreme focus can really make you tired and frustrated. From here, it can be a big downward spiral, as frustration and exhaustion generally don't produce your best playing.

When you're scheduling out the recording, try to arrange things in a way that will allow for everybody to get to take breaks. Though you might have to book some extra studio time, the results you get from it will make a big difference in the quality of the record.

5. Your team is everything

There are tons of people involved in the making of a record. There is, of course, you and your band, but there could also be engineers, producers, session musicians, and managers that have an influence in the final product. The better your team is, the better results you'll produce.

Choose your engineer carefully. If you're going into the studio and planning on just using an in-house engineer, try to research each employee and request the one that best meets your sonic standards rather than just going with whoever happens to be in that day. This is especially important if you're leaving both the tracking and the mix to the house engineer. Though any employee of a successful commercial studio should have enough competency to make your group sound good, it doesn't mean that his or her personal style will mesh well with your vision.

If you are a solo artist, or a band that employs session musicians, make sure that the players you bring in are of a high quality as well. Paying for better musicians may actually save you money in the long run, because cheaper players might end up costing you severely in the studio time they eat up trying to get a decent take (and sometimes, decent is the best they can do!).

6. Plan your follow-up in a timely manner

You have your entire life to write that magic debut record. But once you release it, you've got to work quickly to keep interest in your band.

Though the one-album-per-year model might not be for you, it's important to have some consistency with the rate that you release new music. If it took you 10 years to finish all of the songs on your first record, you'd probably be forgotten if you take that long on your next album! Be sure to keep the next release in mind as you're putting out your first album, and try to not lag in the writing process for number two.