How to Work Your Way Up From Entry-Level Venues 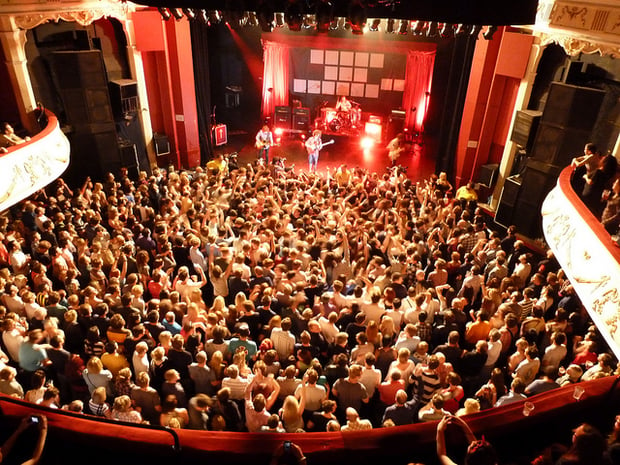 One day, your crowd could be this massive. (Image via flickr.com)

Feeling stuck at entry-level venues? If you're consistently being turned down at bigger venues, it's probably because whoever's in charge of booking is concerned that you won't be able to draw a crowd. The key to changing their minds, then, is proving you've got a strong fanbase.

There's no tried-and-true formula for growing your following. There are, however, several methods beyond conquering smaller venues that are likely to help you advance. We've highlighted four here for you to consider. The success of any of them depends on you – the effort you put in, as well as what you're pushing in the first place.

Every city – even smaller towns – hosts a slew of local festivals, many of them free to the public. Annual shindigs especially tend to draw big crowds, and all of those locals are potential new fans. Sometimes bands and artists focus too narrowly on the venue circuit and forget about these opportunities, when, in fact, they could provide a huge boost to your fanbase. Contact organizers of local festivals and try to get on the bill. You'll have to send the same information as you would when booking at a venue, and there's a chance funding might be too low for you to make any money. Consider the pros and cons – if it's a sizable, well-attended fest, forgoing payment might be worth trading for the exposure.

[Click here to find festivals that are booking independent bands in your city!]

Merch is a marketing investment that, if handled correctly, will help spread the word about your band and earn you some income in the process. Offering recorded music is key in this. Get your music recorded and sell something – even if it's just a two-song CD – to further the relationship of your fans with your music.

Here's what can happen if you don't sell anything at your shows: people might forget your band. They might forget that song they liked, they might forget the name, and then, of course, they'll forget to find you on social media and likely won't be alerted about your next gig. This won't happen with every fan – someone really enthused about your band will go out of their way to find out more. Still, it's important to understand that merch can help you avoid dead ends with the audience you just performed for.

3. Prove the prowess of your social media stats

Venue owners and booking agents likely didn't catch your packed performance at the cafe down the street or last weekend's wild house show, but you can help quantify your crowd for them with your social media stats. We're talking Facebook fans and Twitter and Instagram followers, sure, but you don't have to stop there. You can prove those numbers really mean something if you have high engagement with event postings on those sites.

If the Facebook event for your last gig surpassed the 100-attending mark, why not document it? Take a screen capture of that and any post-show comments left by elated attendees, and save them in case you ever need to back up your claims. Note: We aren't recommending a "see, I told you so!" approach, but rather, a link to an uploaded screen capture when referencing your pull.

4. Team up with a more established band

If your social media prowess alone isn't enough to get you into a mid-sized venue, try making friends with a likeminded band that's already performed there. Their approval might go a long way with the people in charge of booking.

[How to Be the Opening Act That Everyone Loves]

Check out these articles for more tips on gaining stage experience: