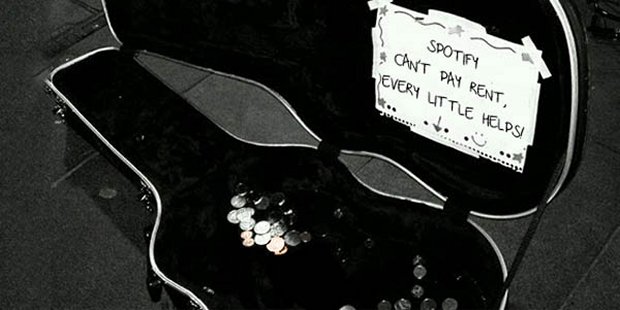 Image via indie-music.com. Images below via Spotify.

Since its debut in the US in 2011, a lot has been written about Spotify and its effect on artists, labels, and the music industry at large. Many have derided the free streaming music service for its mysterious and seemingly stingy royalty system, while others have championed the easy exposure it can provide for DIY and independent bands. Some artists, including Thom Yorke, have spoken out against Spotify, and others such as The Black Keys have opted to prohibit some or all of their catalogue from being made available on the streaming music service. Meanwhile, artists like Moby seem to have accepted Spotify as a step in the process to the inevitable overhaul of the music industry.

Will Spotify finally realize Napster’s vision of cheap and easy digital access to the world’s music library? It’s difficult to say. But what seems clear is that free streaming music services like Spotify are affecting the way many people listen to and spend money on recorded music.

To shed some light on how its business model works, Spotify posted an article on its website in February as well as its projections for future growth. In the article, Spotify describes its service as a viable alternative to music piracy, claiming to "offer music fans a legal paid service capable of generating for artists the royalties that they deserve." The company goes on to position itself a potential savior for the music business by fundamentally restructuring music distribution and consumption habits in order to regenerate the value lost by the industry over the past 15 years.

The first thing to know about Spotify’s business model is that artists and rights holders are NOT paid out on a "per play" basis. Instead, royalties are distributed based on an artist’s "market share" of the total amount of streams on Spotify over a given month. Spotify gains revenue through advertising and its paid subscription service before paying out 70 percent of its total revenue to rights holders. The percentage each rights holder receives from that initial 70 percent is based on a simple formula [see chart above]. From there, royalties are divided up based on existing contracts between labels, publishers and artists. Bands not signed to a label or affiliated with any publisher can receive up to 100 percent of these royalties.

So what does this all mean for independent artists? Spotify gives an example of an actual but unnamed "niche indie album" earning $3,300 in royalties in July 2013. Not so great compared to physical sales or downloads. Spotify argues that as its consumer base grows, however, so will its royalty payouts as its total revenue increases. The company estimates that with 40 million paid future subscribers (there are currently only six million) that the same album will garner $17,000 over a one-month period.

While Spotify’s user base is clearly growing, this sort of estimate makes some very specific assumptions. Publishing and licensing contracts are always subject to change, and it’s difficult to know if Spotify will remain the premier steaming service over the next few years, or whether a new platform will take over with an even stingier royalty system. It also assumes a near 700 percent growth in Spotify’s user base. As an indie artist, this projection further assumes your fan base will migrate to Spotify in proportion to the growth of said total user base. Even with an increase in total revenue, it’s actually conceivable that your payout will become smaller as throngs of Katy Perry and Taylor Swift fans begin using Spotify, in turn diminishing your market share.

It’s still too early to paint a clear picture of the aggregate effect Spotify will have on the industry in the future. It’s very possible that the service could alter people’s listening habits and make it a lot easier for bands to get paid for distributing their music. As of now, however, this new information validates what most independent bands already know about making it in the digital age: the importance of personally engaging your fan base, selling physical merch, and putting on a kickass live show.

Ethan Varian is a freelance music writer based out of San Francisco. He has contributed to publications including Guitarworld.com, Performer Magazine, and The Deli SF.