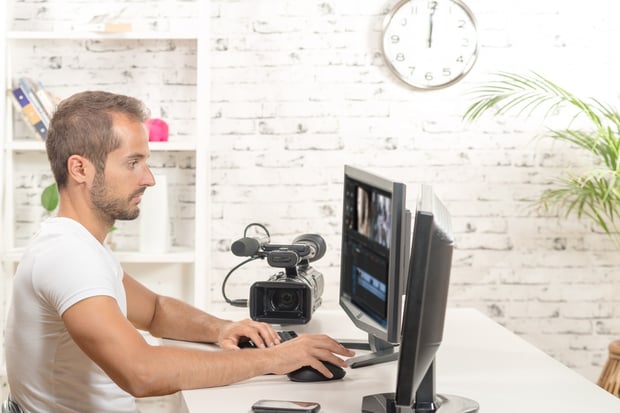 It’s no secret that synchronization (or sync) licenses are one of the best ways for independent artists to earn income these days. Understanding how to actually get your songs placed in film and TV productions, however, can be more of a mystery. Independent musicians often focus on finding music supervisors and convincing them to use one of your songs, and this focus makes a lot of sense, since music supervisors are the ultimate gatekeepers in the sync world. But it can also be extremely taxing, as locating and contacting music supervisors can be an awful lot of work, especially for busy DIY musicians.

In the absence of representation by a publisher or record label, many indie artists have turned to a variety of “middleman” type companies that help bridge the gap between music creators and the people who place music in film and TV productions. One such option that has been gaining in popularity in recent years is the curated production music library.

So what exactly is a production music library, and what do these music placement companies do? To find out, we spoke with John Hilhorst, co-founder of Community Tree Music, a music licensing company that helps Canadian indie artists get their music placed in film and video productions.

What is an indie production music library?

A production music library is essentially a discovery tool that helps filmmakers find music for their projects. Rather than having to search through a variety of platforms and deal with each artist directly, filmmakers are able to browse a library of pre-cleared music that can all be purchased from a single provider.

While some production music libraries require exclusive ownership of their material, many libraries that cater to indie artists are non-exclusive, meaning the artist retains the full rights to their music. Instead of owning the copyright, these libraries will often take a portion of the fee from each license sold.

Community Tree is one of these types of libraries. Being a filmmaker himself, Hilhorst understands not only the importance of finding great music for picture, but also the difficulties involved in sourcing that music.

Hilhorst and his business partner Mathew Collings decided to start Community Tree when they “noticed a need for this particular market to not only have a portal to find exclusively Canadian music, but also to support and represent indie artists who are incredibly talented but haven’t had a chance to get started with licensing.” When artists join Community Tree, Hilhorst says, they “join a community with an easy-to-browse catalog of some of the highest quality Canadian music.”

What do artists gain by having their songs in a production music library?

“At Community Tree, we like to have a close relationship with all of our artists,” Hilhorst says. “We constantly promote their new releases through our social media and try to stay in touch as often as possible.” Because they place an emphasis on supporting artists, Hilhorst explains, Community Tree’s business model is “somewhere closer to a production music library with a hint of licensing agency mixed in.”

Other music placement companies that focus on supporting independent artists take a similar approach. This makes these types of companies good options for artists who don’t already have the support of a record label or a publisher, as the promotional work done by the placement company can help to fill some of those gaps.

“Not only are filmmakers able to find our website and browse through it and purchase a license within minutes, as we continue to grow our roster, we keep expanding our network with filmmakers,” Hilhorst says. “There have been occasions where we are contacted directly with specific requests, at which point we pitch what we deem to be the best fit for that specific project.”

The same is true of many other music placement companies; not only do they license pre-existing songs, they also give filmmakers the opportunity to commission custom pieces from the artists in their roster.

How can artists get their songs into a production music library?

“At Community Tree, we’re constantly looking for new music, to the point where we’ve listened to well over a thousand individual artists,” Hilhorst says. He points to two main reasons why his company will reject an artist’s material. The first is poor quality recordings. “This is a difficult point as we fully understand that recording in a studio can be very costly, but we do require excellent recorded quality, since that’s the only representation the music will be heard on,” he says.

The second reason for not accepting an artist’s songs is if the artist has a poor online presence. “If you want to be found, we recommend having a Bandcamp or a SoundCloud [account] where some of your music is cataloged,” Hilhorst says. “Remember that it’s essential to make it easy to be contacted, which you can do by adding your email to your about section on Facebook, Soundcloud, and/or Bandcamp, as well as ensuring that you have a unique name that can be googled.”

Another issue that can be problematic for music placement companies is the availability of instrumental tracks. “This is simply to offer more options to the filmmakers who often do prefer to work with instrumental tracks, depending on the project,” says Hilhorst.

If you think you can meet these standards, Hilhorst recommends contacting the music placement company directly and sending them examples of some of your best songs. While Community Tree works exclusively with Canadian artists, there are many other music placement companies that are open to submissions from artists in the US and around the world.

These companies include the Music Bed, Marmoset Music, Zudo Music, and many others. Many of these companies will provide instructions on their website on how to apply to join their roster, so be sure to follow the instructions for your best chance of being accepted.

If you’re serious about making money from sync licensing, being part of an indie production music library can be a great way to generate passive income (from selling licenses for previously recorded songs), and can even present new moneymaking opportunities (through custom commissions). You should also be aware, however, that the types of sync placements you get access to through production music libraries won’t necessarily be the six-figure deals you’ve been dreaming about.

While many of these music placement companies do work with major international brands, they also work with independent filmmakers, wedding videographers, and amateur creatives. By offering sync licenses on a sliding scale based on audience size, these libraries make their music available to a wide variety of users. So while having your music accepted for a production library will increase your potential to generate income from your music, working with a production music library should be just one part of a comprehensive sync licensing strategy.