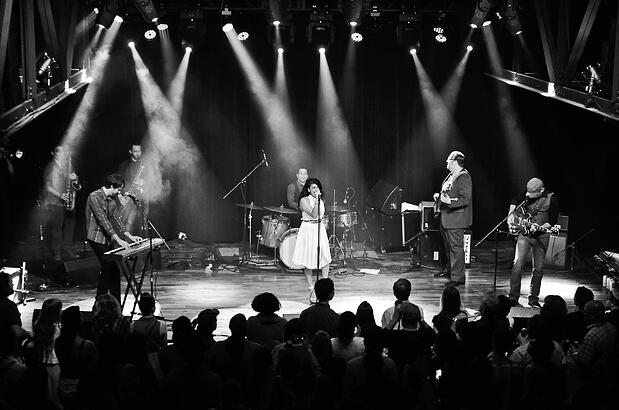 Ruby Velle of Ruby Velle and the Soulphonics offers tips for staying positive despite financial strife. (Photo by John Whittaker)

Anyone with even a sliver of sense knows that making music is not a lucrative field for most. In many instances, you'll spend money – like on recording or merch – and won't recoup all those funds right away, if ever. And while the non-monetary rewards of a completed album, a gushing fan after a show, or even critical accolades are what truly make it all worthwhile, it's only natural to be discouraged by the lack of financial success.

We've enlisted two longtime musicians, both based in Atlanta, for tips on coping with such struggles. One is Ruby Velle of Ruby Velle and the Soulphonics, an outfit that supports its exceptional funk and soul jams with smart marketing and promotional strategies. Our other consultant in keeping content is Pietro DiGennaro, who currently drums for the '60s garage-pop leaning group Black Linen. Take it from them: staying positive ain't easy, that's for sure, but it's definitely possible. And giving in to negativity won't help you anyway.

1. Don't dwell on past problems

Did a booking agent fail to follow through on a promise to pay post-show? Did you arrive at an out-of-town show to find the club hadn't posted the promo you sent months before? Were you bumped from a lineup at the last minute? These things happen, unfortunately. You can't waste time moping about them for long – instead, consider it a lesson learned and move on.

"It hurts, even more so when you've been playing your instrument for years and think you are a valued musician, [and] that getting paid shouldn't be an issue," Pietro DiGennaro says. "I give everyone one chance. If you screw with my money, I never work for that person again."

On the flip side of inevitable follies, maybe it's your own fault that money was squandered. If you bet your last dollar on a T-shirt design that didn't sell, booked a tour that cost significantly more than it returned, or involuntarily lost money in some other way, again, don't spend a lot of time brooding. It won't solve your problems.

"Try not [to] focus on the past ways you've misspent money as a band – it can cause unnecessary tension," Ruby Velle advises. "Instead, acknowledge it and learn from the mistakes collectively, and move forward."

2. Concentrate on what does work for your band

Think back to your band's financial wins and work to repeat them. For Ruby Velle and the Soulphonics, one of those options is vinyl. "[Vinyl] is a way to offset cost of all our production in general, and our fans cannot get enough. We strongly believe in vinyl and I have always pushed it since day one, and now we're seeing an increase in the industry on sales, which is comforting," Velle says.

If vinyl isn't your sweet spot, consider other areas where you've seen success. What about tapes? They're cheaper to produce than vinyl, and there are plenty of collectors within certain genres. Or maybe you performed in a nearby city where both the club and the crowd loved the show – could you work out a guarantee for your next visit? Whether it's a residency at a local watering hole or something bigger, if the response was good, honing in on that endeavor – even if just for one more go – could be a means of elevating everybody's spirits (and your band fund).

3. Set goals and stick to them

Making a plan for the future does more than keep you organized. It can be incredibly satisfying and uplifting to tick off accomplishments one by one. Velle adds that networking has played a big role in the band's progress, but that playing shows is still the nuts and bolts of their operation.

"We always want to play more shows, because that is what makes us thrive financially and spiritually. So our strategy this year has been to set a 'number of shows' goal and stick to it," she says.

4. Share the work within the band, and outsource to people who believe in you

"Utilize each other's skills, hire good management, or, if [that's] not an option, some interns to help you build funding options," Velle suggests. "If you do this early on, I swear you will save yourself a lot of time and have less regrets. It takes hours to create music that is original and videos that express yourself, so keep that in mind when you think that you can wear lots of hats."

Velle raises an interesting point there about interns. Some independent bands run almost like small businesses, so why not offer an internship? It certainly isn't for every group, but a mutually beneficial relationship – the intern learns from you, and they help out where they can – could work for some.

"As far as Black Linen goes, we have agents that do our booking; everything is run by them, [and] they believe in us," DiGennaro says. "We are shopping our debut record around to labels instead of putting it out ourselves, so we will sit on it until that happens."

Regardless of whether you have a manager, booking agent, or are fully DIY, no single member should be bearing the brunt of the work. Failing to share responsibilities is a recipe for resentment.

5. Remember your reasons for making music

What it all boils down to is the whole reason you got into this business in the first place: music. "You can never give up on music," says DiGennaro, "no matter what the situation is, if you are trying to make it. I've been poor for years and never gave up. Nothing is better than finishing a song and looking back at it and saying, 'Wow, I did that.' It's the best feeling in the world. I would rather have that feeling than have money in my pocket.”

"Don't forget the essence of why you started creating music," Velle asserts. "I imagine for most of us it's not truly rooted in oozing gold coins from our pockets. That's okay. In fact, that is what makes each music project unique – it's that everyone in your band has a different view on this. Me, personally, I'm reminded to let go of the material when expressing myself through music – instead, try to accept wealth in its different forms. Didn't Jimi Hendrix say, 'It's all freedom?'”