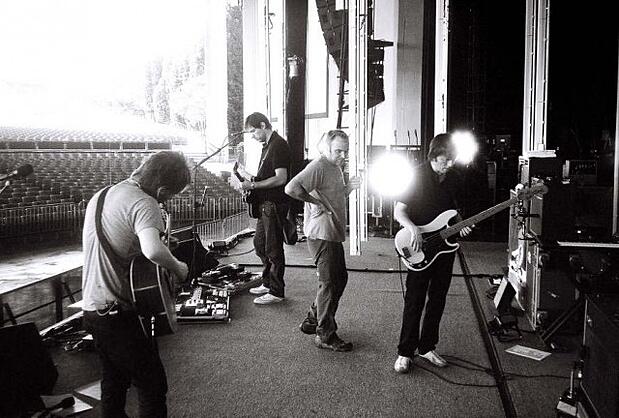 You've done your soundcheck. The levels and the mix are to your liking. Everything is laid out in front of you to put on a great show. There's nothing left but to wait. So how do you best utilize your time?

Playing a great show means being prepared – mentally, physically, and emotionally. Here are 10 smart ways to make the most of the time between the end of soundcheck and the start of your show.

If you're a vocalist, this could mean running over scales or breathing exercises to be sure your range is awake and capable of hitting all of those show-stopping high notes. For instrumentalists, it's always helpful to run through practice scales from slow to fast. This way, you ensure your instrument is fully stretched and energized for a great, flawless show.

You never want to perform on an empty stomach. For those with stage fright, having an empty stomach can increase your nerves' shakiness. Singers know that when they go to take that big breath to hold out a gorgeous, swelling note with fluttering vibrato, they don't want to be held back by an empty stomach growling for food. On the other hand, you don't want to go onstage having just eaten a massive Chipotle burrito. Have a light snack – something healthy that will sit well. Fruit that isn't too citrusy or high in sugar is always a good bet (bananas are your friend). And water! This is especially important for singers, but other band members can also benefit. You'll be pouring your heart out up there, so stay hydrated.

This primarily applies to singers. After you've warmed up your voice, hold off on talking too much, especially if you have to shout over loud music. There's nothing worse than going hoarse right before a gig because you were shouting during the opener's entire set, having a conversation you didn't really need to have in the first place. Let your voice rest a bit.

4. Tweet a behind-the-scenes, "We’re about to go on" message

This works best for Twitter. If you're a really small band that doesn't play shows often, Facebook and Instagram will be okay. But generally, stick to Twitter, because it's a platform that runs off of multiple daily postings. Remind your fans that you're about to hit the stage, and you still want to see them there. Post a cool picture of the band hanging backstage with a caption like, "Such-and-such band is wrapping up right now, then we're on next! Come hang out!" We can't guarantee you'll reel in several stragglers via Twitter, but someone out there will appreciate the last-minute reminder!

5. Socialize with the other bands and venue workers

It's always important to be friendly with the other bands you're playing with. Not only does it expand your network, but also it builds lasting musical relationships. Maybe the other bands aren't your style or the bassist of that one band smells like pickles, but you always want to make a positive, professional impression. Show some interest in what they're doing and have a great show together. This also goes for the venue workers. Go out of your way to thank them. Be an easy musician to host. They might not directly thank you for being easy to work with, but they'll certainly appreciate it and remember you.

6. Set up your merch table, and make sure it looks great

Usually, smaller-scale, local bands set up their own merch tables. If you're a bigger artist and don't have to worry about it, this won't apply to you as much, since you have a reliable team in charge. But for most of us starting out, we set up our own merch tables. Be sure it's organized, inviting, and looking great. Make sure you have everything on display: email list signup, CDs, posters, T-shirts, etc. Make sure it's in a clear area that's accessible to fans. Don't put your merch table in a dark-lit corner that's behind a swarm of drunk people at the bar.

Stretch it out. Performing live is a form of exercise. You want to put on a lively, energetic show your fans will remember, so be sure you're physically prepared to stretch out and rock out.

Take some time to clear your head, whether that means going to the back of the venue by yourself for a bit and just meditating quietly, or having a light, relaxed conversation with a band member. Maybe going over practice scales is meditative for you – try that. Either way, it's important to calm your nerves before you go onstage. If you're busy thinking about whether your ex-girlfriend is going to show up or not, then you'll only get in your own way. It's natural to have some nervousness when going onstage. In fact, it's a good thing. You want to be thoughtful and precise. But being too panicked or cluttered in thought can cause big mistakes live.

9. Write out and memorize your setlist one last time

You will want to have your setlist already written out and rehearsed before your show, but just to be sure, write it out a few more times to make sure it's ingrained. It's a good idea to print off your setlist beforehand to tape to the monitors so you can refer to it.

10. Get amped up to play a great show

Every band or solo artist has their own way of getting in "the zone," where you feel amped up and ready to go onstage. Maybe it's blasting dubstep and jumping around. Maybe it's running a lap around the venue. Whatever it is, get excited to play a killer show and have an awesome time!