5 Things You Should Always Do After Playing a Gig 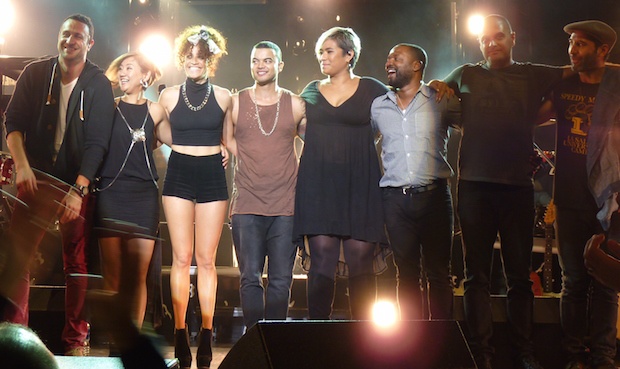 What to do after the final bow. (Image by DianeSunshineCoast via Wikimedia Commons / CC BY-SA 3.0)

You just played an awesome show – but now what? Even though the gig is over, there's still work to be done. Some tasks need to be taken care of while you're still at the venue, while others should be completed in the following days. Here are five things you should always do after every gig, no matter how big or small it may be.

When you're playing a show, you're high on adrenaline. You're burning more calories than you'd think, which can leave you feeling quite tired after the show is over. Make sure to grab a bite to eat after the show to replace the energy you spent. In most cases, the venue should offer band discounts on food and drink, which is always great for after your set.

After your set is over, make sure you thank the venue manager and sound tech. Sound technicians rarely get as much appreciation as they should, so they're bound to remember those who took the time to thank them for their hard work. Showing gratitude to the sound tech and venue manager for having you play and for their help that evening will most likely result in a higher chance of playing there again. While in-person thank-yous should be a given, it's always great to follow up with a thank-you email as well a day or two after your show.

3. Make sure everyone gets paid (if you're not doing a free show)

Most venues will require you to stick around until the last band is done for payout, unless different circumstances have been discussed prior to the show. If your whole band can't stay, it's almost always mandatory that at least one member stays so you can claim the money you've earned. Once you've received the money, you can distribute it however you've decided with your band members.

4. Network with other bands

Don’t be one of those bands that gets there right before their set and leaves immediately after. Ever. The other bands sat through your set and were hopefully cheering you on, so you should offer the same support or set an example for those acts who aren't supporting their fellow musicians. Having contacts in your local music scene or creating connections with touring acts is vital to network growth. Oftentimes, playing a gig with another band can lead to great friendships. Stick around, watch their set, and strike up a conversation after they're done. If you have business cards, make sure to give them one to stay in touch, or add them on social media.

5. Thank those who came out to see you play

Your fans took the time to come out to see you, and because you played a great show, you likely gained some new ones! Using your various social media platforms, thank your fans for coming out. If you're smartphone savvy, get your fans involved by taking photos with them and posting them to your social media accounts. This is a great way to say thank you and get to know those who care about your music.

What do you always do after a gig? Let us know in the comments below.